Finch Claims the Spoils (as Proctor gets stumped…!)

There was 1st stage drama when last year’s winners and top seeds Kevin Proctor / Patrick Walsh (Fiesta S2000T) slid wide and hit a tree stump breaking a wheel and damaging a drive shaft, taking a stage maximum. They managed to repair the damage and re-joined the event taking 3 fastest stage times before a failed alternator finally put them out for good.

Finch and Renshaw were tied over the first 2 stages with Dave Hornbrook / Ann Foster’s Mitsubishi Evo4 a further 3 secs down, closely followed by David Longfellow / Daniel Ward’s Subaru Impreza. Out of contention though on stage 2 were David McMullan / Marc Melhuish after their Mitsubishi E6 hit the same tree stump as Proctor.

Over the next couple of stages Finch managed to pull out a 9 sec lead over Renshaw whilst Hornbrook and Longfellow were still only 3 sec apart in third and fourth.

Finch was fastest over the final 2 stages to increase his winning margin, leaving Renshaw a relatively comfortable second. A late charge from Darrel Taylor / Steve McNulty’s Fiesta R5 saw them move up to 3rd ahead of Hornbrook with Longfellow sidelined on the final stage with mechanical woes.
Oliver Davies / Ben Innes claimed fifth over and but also took the Class 4 win after Stephen & Cathy Booth’s Ford Escort Mk1 had suffered a broken propshaft on Stage 4. Martin Farrar / Andy Ward (Impreza) completed the top six. 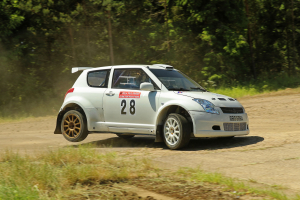 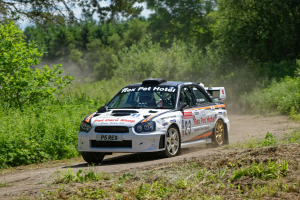 The 2021 Rex Pet Hotel Flying Fortress Stages was again a huge undertaking for Dukeries MC to put on especially with the implementation of all the Covid-19 mitigation procedures. Thanks once again to Clerk of the Course Andy Smith and all of the organising team, officials, marshals, safety crews and competitors for playing their part.