LONGFELLOW MAKES IT TWO IN A ROW….!

For the second successive year David Longfellow and Danny Ward’s Subaru Impreza were victorious at Grafton Underwood.  With a 15 second lead on the opening stage Longfelow’s intentions were fairly clear and with second placed David McMullan/Marc Melhuish’s Mitsubishi Evo 6 breaking the gearbox on stage three, he reached halfway almost a minute clear.  Martin Farrar/Andy Ward’s Impreza had been third from the start, but stage three claimed him too after going ‘off’ in amongst some tree stumps, so it was former Peugeot Challenge ace Jason Sharpe/Benjamin Hume that completed the podium in their Impreza.

But second place (as in 2018) went to Martin Pavier/Pete Kettle, their Impreza had been fifth on the opening stage and gained a place per stage until consolidating second overall from stage four, They rounded off a successful day by taking the fastest stage time on the last three stages too, but still trailed the winning Longfellow by just over a minute.

With Dave Hornbrook/Matthew Sample’s Mitsubishi E6 vacating an early fourth with a broken boost pipe on SS2, the Impreza’s of Gary Wayne/Sam Bailey and Scott Renshaw/Chris Bullock came into the frame. Wayne, in his recently acquired (ex Karl Simmons) car, had started to close on third placed Sharpe, while Sean and Max Bailey’s Impreza which had some intermittent brake issues, closed to within a second of Renshaw too. But on stage six Bailey hit a log pile and one pierced the screen, Wayne also lost time, which left Renshaw safe in fifth.  Stuart Cadman/Dennis Suttenwood’s Evo 4 was also a victim of SS6, which then brought Ian Tiffany/Grahame White’s Impreza into the top six.

All six held station over the last two stages, while in seventh were Class 3 victors John Stevens and Stephen Moyses (Mk2 Escort), ahead of the Class 4 winners Rob Smithson/Martin Corbett also in an Escort. Rounding off the top 10 were the Impreza’s Hugh Peat/Steve McNulty and the ‘most knowledgeable crew’ at this particular venue, Andy Smith and Bob Draper. Despite being the event organisers for the previous 8 years they were still caught out a little by the slippery conditions on the first stage, but from then on the stage times improved as the conditions got better.

Joseph/Rene Van Vilsteren’s Micra was the only runner in Class 0, while in Class 1 Matt Wood/Ian Faulkner’s Corsa initially led the way but were forced to retired on stage 3 with a broken gearbox. With Adrian/Matt Walk’s Ford Ka out on the same stage with a broken engine mount, Mick Pickles/Beverley Warren’s rapid 1340cc Micra turned an early second into a comfortable win over Mike Collins/Chris Sheridan’s similar but more standard car.  Andy and Cass Graham’s Escort led Class 2 all day from Phil Kenny/Gary Laverick’s Ford Puma, with Andy Johnson/Paul Topping’s Proton Satria the only other survivor.

Paul Rees and Emma Morrison’s Astra led a very competitive Class 3 on the opening stage, but John Stevens and Stephen Moyses (Mk 2 Escort) were just ahead after stage 2. Rees retook the lead by just 2 seconds on stage 3. However, this battle ended on stage 5 when Rees went off the road and got stuck in a ditch, handing Stevens a clear lead which he consolidated in fine style on the remaining stages, setting 4th and 3rd fastest overall times on the final two stages.  Adrian & Lindsay Baker’s Escort was initially ahead of Dave Baines/Alan Jackson’s Astra, but they retired after “damaging the passenger door”.  Baines just held onto to second from the rapidly closing Mk2 Escort of Chris Langthorne and Rebecca Marshall who were hampered with a cracked screen. 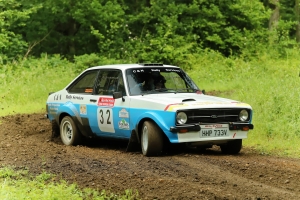 Smithson/Corbett led Class 4 in the early stages ahead of Philip Rowland/Philip Woodcock’s BMW. 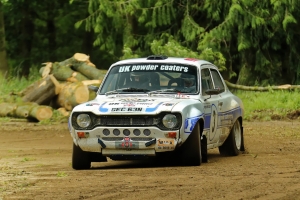 Other Dukeries crews had mixed fortunes on a day when it paid to drive neatly especially on the tight concrete roads in the woods. Jonathan Lightbody / Tom Holman in the (Subaru Impreza) had a successful and consistent day finishing 18th overall.  Tom Hobson / Elisha Blackwell  (Ford Focus)  suffered a stage maximum on stage 5 but still manged to finish 33rd overall.

However, Ian and John Dove (Vauxhall Nova) were less fortunate because after problems on the open stages were overcome, they were forced to retire after SS6 with broken shock absorber mounts.  Paul Fearn and Leonie Marchbank (Talbot Sunbeam) had a short but quite eventful day.  They started with a stage maximum on stage 1 but followed that by a couple of very competitive stages before going off briefly on stage 4 and having to retire with a crushed sump. Unfortunately, Des Moody (Escort RS) felt unwell on the morning of the event and was unable to start.

Finally, we welcomed back Simon Double who was accompanied by Jessica Mitchell in a MG ZR160. Simon was a Dukeries member in the 1990’s and also the sponsor of the Premier Rally for several years through his Icon Labels business.  Sadly, his return to competition was rather brief when he had to retire early on with a failed clutch.

Initial event report by Peter Scherer with some additions.  Images by Kevin Money.