Congratulations to all the Award Winners on the 2020 REX PET Hotel Flying Fortress Stages. A full list of all the stage times can be found HERE
In the event preview we did predict that the crew of Car 2 were the favourites and have some previous history on Dukeries MC events; Kevin Proctor had won the Premier Rally in Sherwood Forest in 2000 and 2003 whilst Patrick Walsh was part of the winning crew on the 2018 Dukeries Rally and the 2019 Donington Rally.
And that was how it turned out….!   Kevin and Patrick [Fiesta] were the convincing winners of the event and at a venue where they had never been before. They were chased all the way to the finish by Steve Finch and Sam Fordham in another Fiesta, with last year winners David Longfellow and Danny Ward [Impreza] coming home third. Stephen and Cathy Booth [Escort Mk1] came 4th overall and were the leading 2WD car and winners of Class 4. 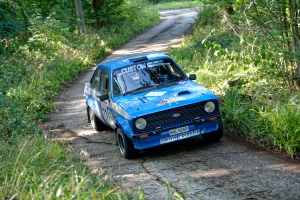 The battle for Class 3 honours became very much a family affair with John Stevens and Antony Cowpe [Escort Mk2] finishing 6th overall, this time just ahead of Craig Stevens and Steven Moyses [Escort Mk2] who were 8th. Paul Rees/Emma Morrison [Astra GTE] started more slowly but after the first couple of stages they were very much in the mix with the Escorts and finished 12th overall. 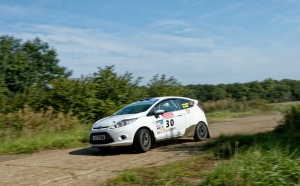 Connor Tolson and Brian Ilaria [Fiesta R2] were the winners of Class 2 whilst the drive of the day came from Kasia Nicklin and Darren Scales [Nissan Micra] who won Class 1 and came 17th overall from a start number of 51; over 4 minutes quicker than others in the up to 1400cc class. 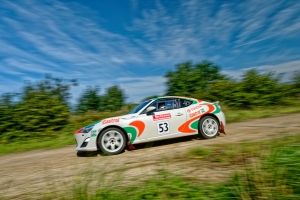 Ian Bass with Lacey Brown as co-driver once again thrashed the 998cc Toyota Yaris and were rewarded by victory in Class 0 whilst Joe and Michael Evett were the highest placed crew in the BMW Mini Cooper Challenge.

Make no mistake, the 2020 Rex Pet Hotel Flying Fortress Stages was a huge undertaking to put on at such short notice, especially with the implementation of all the new Covid-19 mitigation procedures. Thanks to all the organising team led by Clerk of the Course Andy Smith and to all the officials, marshals, safety crews and competitors for playing their part.  Thanks also to REX PET HOTEL (Nigel and Louise) for their continued support.